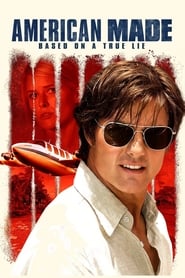 IMDb: 7.2 2017 115 min 1194 views
The true story of pilot Barry Seal, who transported contraband for the CIA and the Medellin cartel in the 1980s.
ActionComedyCrimeHistory

IMDb: 6.1 2016 118 min 1089 views
Jack Reacher must uncover the truth behind a major government conspiracy in order to clear his name. On the run as a fugitive from the law, ...
Action

IMDb: 7.0 2012 130 min 1072 views
In an innocent heartland city, five are shot dead by an expert sniper. The police quickly identify and arrest the culprit, and build a slam-dunk ...
CrimeDramaThriller

IMDb: 7.4 2015 131 min 1251 views
Ethan and team take on their most impossible mission yet, eradicating the Syndicate – an International rogue organization as highly skilled ...
ActionAdventureThriller

IMDb: 7.4 2011 133 min 1292 views
In the 4th installment of the Mission Impossible series, Ethan Hunt (Cruise) and his team are racing against time to track down a dangerous ...
ActionAdventureThriller

IMDb: 6.1 2000 123 min 1203 views
With computer genius Luther Stickell at his side and a beautiful thief on his mind, agent Ethan Hunt races across Australia and Spain to stop a ...
ActionAdventureThriller

IMDb: 7.1 1996 110 min 1277 views
When Ethan Hunt, the leader of a crack espionage team whose perilous operation has gone awry with no explanation, discovers that a mole has ...
ActionAdventureThriller

IMDb: 5.6 2017 110 min 2061 views
Though safely entombed in a crypt deep beneath the unforgiving desert, an ancient queen whose destiny was unjustly taken from her is awakened in ...
ActionAdventureThriller

IMDb: 7.9 2014 113 min 1227 views
Major Bill Cage is an officer who has never seen a day of combat when he is unceremoniously demoted and dropped into combat. Cage is killed ...
ActionScience Fiction

IMDb: 7.6 2004 120 min 1365 views
Cab driver Max picks up a man who offers him $600 to drive him around. But the promise of easy money sours when Max realizes his fare is an assassin.
CrimeDramaThriller